Maria Cohut is a doctoral student in her final year, based in the English and Comparative Literary Studies at the University of Warwick. Her research examines the meaning and importance of the relationship between female figures and reflective objects in the literature and visual art of nineteenth-century Britain. More extensively, she takes an interest in tropes of doubling in literature and art, representations of death and decay, and the Gothic mode throughout the ages

First of all, let me linger for a short while on the figure of Emma Sandys. Let me make that ‘a very short while’, because very little indeed is known about her, except that she was the younger sister of much better known painter Frederick Sandys, and that she lived between 1843 and 1877. What scarce information can be gathered about her life and work comes from a limited array of discrepant sources, such as (the guilty pleasure) Wikipedia page that features no more than a stub article [i], Jan Marsh and Pamela Gerrish Nunn’s excellent book Pre-Raphaelite Women Artists [ii] and the webpages of art galleries, which sometimes offer questionable ‘facts’ [iii]. The information regarding her life and the legacy of her works amounts, essentially, to this: that she was born into an artsy family and therefore received her main artistic instruction ‘at home’, first from her father, Anthony, and later from her brother, Frederick; that her ‘chief advisor’ in matters of craft was her brother; and that her works have often been misattributed to her brother, due to common elements of style, and props and accessories shared between the two of them and featured in the work of both [iv]. In short, in the manner of ‘wife of the above’ epitaphs, Emma Sandys always only seems to feature – if at all – as ‘sister of’ Frederick, and her life and career remain enshrined in mystery.

All of this is very frustrating once you stumble upon one or another of her fascinating works, which will not fail to spark curiosity. In her paintings, there is often some striking detail that is so enigmatic it forces one to rethink any superficial opinion one may have formed of that particular picture. In my case, this happened when I chanced upon her curious painting, Viola. As is the case with other paintings of hers, such as Preparing for the Ball [v], the attribution of the title is uncertain, and here based on the epigraphic quotation inscribed on the frame of the painting, which links it to Scene IV, Act II, of William Shakespeare’s Twelfth Night: ‘Duke: And what’s her history? Viola: A blank, my lord. She never told her love.’ Marsh and Pamela Gerrish Nunn remark on how unusual this depiction of an otherwise popular subject is, as Viola – assuming the attribution is indeed correct – is not shown as she appears in the referenced scene, that is, dressed in men’s clothes, but as she is imagined in the conversation between her and the Duke [vi]. Be that as it may, the woman’s intricate layered outfit, her accessories, the styling of her hair, the design of the window casement are all reminiscent of a typical late Romantic medievalist painting, and set the character quite firmly in a context of fifteenth- or sixteenth-century inspiration. What I find most intriguing about this already challenging picture, however, is the round mirror in the background, reflecting what looks like a typically Victorian room, and thus disrupting the historical illusion. In an article, Pamela Gerrish Nunn identifies in the discrepancy between the reflection in the mirror and the general medievalist context in which it is placed an‘[emphasis on] the artist’s rhetorical use of the Shakespearean reference’ [vii]. She reads this conscious inconsistency as a warning to the viewers that the portrait they have in front of their eyes is a quasi-allegorical depiction, whose topic must be considered within a Victorian ‘frame’. Later, in Pre-Raphaelite Women Artists, Marsh and Gerrish Nunn link this mirror to the one present in Ford Madox Brown’s unfinished painting Take Your Son, Sir!, which is also used to reflect a Victorian interior [viii]. There are marked differences between the two mirrors, however. 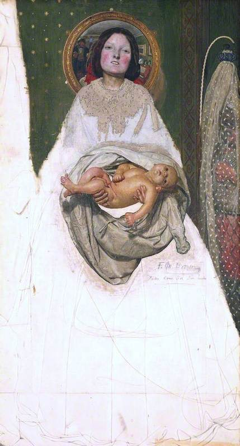 Unlike Viola, Take Your Son, Sir! is firmly set in a Victorian context, and there the reflection shown in the round mirror helps build and clarify the story that the painting tells: a spurned mother holds out her (implicitly illegitimate) infant to its father accusingly. The round mirror in Madox Brown’s painting also frames the woman’s head like a halo, suggesting a potential reading of the scene in terms of Christian values and morals. In Viola, rather than setting the scene, the mirror dismantles it, and it certainly lends no iconographical benefits to the character. The question, then, remains open: what purpose could the mirror possibly serve? Gerrish Nun’s idea that it stresses the rhetoric, figurative engagement of the painting seems intuitively to be the most legitimate. But as a figurative depiction, what does the portrait signify? Is it melancholy eros, figured by the woman who cannot and may not express her love? This would make sense in a reading of the character as Shakespeare’s Viola, unable to confess her love to the Duke, who is unaware of her gender, and in love with another woman. Is it melancholy, full stop, or the nostalgia of the traveller who finds herself in the impossibility of returning home? This reading is attractive especially if we consider Marsh and Gerrish Nunn’s suggestion that the painting’s subject might be not Viola, but, in fact, the wandering Enid of Arthurian fame, ‘who was forced to leave her home and travel aimlessly through the world with her doubting husband’ [ix].

Regardless of who the female character is, what I find significant is the relationship between her compelling gaze and the disconcerting mirror reflection. One expects a mirror to reflect the other side of the room, the invisible, inaccessible side. Placed on the otherwise barren wall in the ‘Elizabethan half’ of the chamber, Sandys’s mirror creates the impression that the other half is a Victorian salon: the room this woman inhabits is an anachronistic space, in which the (idealised) past meets what to the Victorian viewer would have been the familiar present. Thus the woman could be said to be gazing into that present from her position in an idealised, emblematic past. In the iconic, medievalist half of the room in which she is pictured, the woman is herself an icon gazing melancholically (and passively) towards the modern context that made her such. Nonetheless, placed in the same dimension through the medium of the mirror, past and present overlap, substituting each other continuously, and thus neutralising each other: it may be that ‘past’ and ‘present’ lose meaning in the context of this painting. It may also be that the woman’s gaze is directed not to the other side of the room, inaccessible to the external viewer except via the mirror, but that it is an unfocused gaze, oriented internally rather than externally. It may be that it says: ‘past and present are all the same to me’. The young, sad woman of Emma Sandys, with the anachronistic mirror behind her, exudes a sense of statuesque resignation: past and present conflated are equally detrimental to her.

One striking detail in this puzzling painting complicates its message in so many ways, so I would love to hear back from readers on this point. How would you interpret the reflection in the mirror, and what do you think its relationship to the young woman is?

[1] The relevant page on the Peter Nahum at the Leicester Galleries website, for instance, mixes up the forenames of her father and brother. See the entry for Reverie by Emma Sandys, <http://www.leicestergalleries.com/19th-20th-century-paintings/d/reverie/49943>.

2 responses to “Yesterday’s Woman Is Today’s: Past and Present Overlapping in Viola by Emma Sandys”