Jack Gann (@jackrgann) is a second-year PhD student with Leeds Centre for Victorian Studies at Leeds Trinity University. His research focuses on interpretations of the Victorian street scene in the contemporary heritage industry, specifically on the reconstructed streets that appear as galleries within museums and how their offer of a performance of walking the streets of the nineteenth century presents a different visitor experience to that of other museum displays. 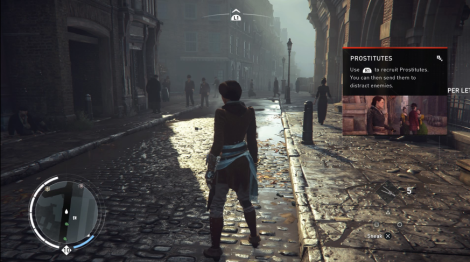 The experience of walking the city streets, whether for the pleasure of urban exploration or as a passage to get from one place to another, is one that varies from one person to the next and, perhaps more obviously, between genders. The likes of Hollaback and Rob Bliss’ 2014 viral video ’10 Hours of Walking in NYC as a Woman’ provoked hundreds of responses and helped stimulate further awareness and debate surrounding the emerging concept of ‘microaggressions,’ the catcalling and verbal harassment endured continuously by women walking in the city. This experience of women walking in the city is, of course, nothing new. In her book on the streets of nineteenth-century London, Victorian Babylon, Lynda Nead cites an 1862 article carried by the Saturday Review on ‘The Rape of the Glances,’ describing ‘respectable’ women being accosted in London’s West End as if they were prostitutes. There is even a suggestion, as in defences of such objectification today, that the women might have, in their dress and behaviour, encouraged this attention. [1]

I mention these differing experiences of men and women walking in the city because I was reminded of this when playing Assassin’s Creed Syndicate, the latest game in the long-running time-hopping historical adventure series. This new instalment occupies the same time and place (1860s London) as ‘The Rape of the Glances’ and, for the first time in the series, allows players to choose to walk the streets as a male or female character. I have written previously on Syndicate and, in that piece, I discussed the way in which the game – away from its grand historical conspiracy narrative of shady secret societies – succeeds at presenting a real-feeling sense of Victorian London as a setting through which players can explore and with which they can interact. There I evoked the popular literary archetype of the flâneur to suggest the Victorian period as an entirely appropriate one for this representation of virtual urban walking for pleasure.  But what of the flâneuse? What does Syndicate have to say about the different experience of women walking in the city? 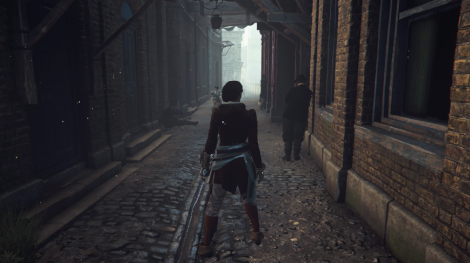 One – perhaps unintended – consequence of having twin protagonists Jacob and Evie Fry experience the same things is to highlight how the same behaviour directed towards a woman walking in the city and a man in the same space does not necessarily provoke the same response. While the shouts and cries directed at the player from rival gangsters as they pass in the street are coded the same in software terms, the social coding of yelling ‘I’m gonna gut you like a fish’ at a lone woman is clearly not the same as at a man, and, even as a male player, this feels a more uncomfortable threat directed towards my female avatar than if I were to play as Jacob.

This is particularly worthy of consideration when viewed in the wider context of the enduring issues of harassment faced by women in the gaming world and the difficulty of female players, creators and characters finding a safe and comfortable space in which to exist. [2] Against that backdrop, Assassin’s Creed creators Ubisoft came under heavy criticism for offering a lack of opportunities for women when the previous game in the series, the French Revolution-set Unity, featured no playable female characters. [3] The presence of Evie as a playable protagonist in their latest game, therefore, feels like an attempt to redress this criticism. In general, however, the vast majority of missions that require a player to play as a specific character require them to play as Jacob alone and the game’s narrative does little to engage with gender narratives either in the present or the nineteenth century. An interview in The Guardian with the cultural historian Alana Harris suggests that:

‘It’s interesting that, although Ubisoft made a big deal of including a female protagonist – the resourceful assassin Evie Frye – there’s no attempt to consider women’s history. […] Including a protagonist who has agency in a time when women had none could have lead to some enlightening moments – without recognition, it’s jarring. Syndicate is willing to address issues such as child labour, but sanitises race and gender. […] As Harris says: “There’s an ahistorical representation of women here and whether that actually fully engages with the issues of women’s history, or gender history for that matter, it’s a missed opportunity perhaps.”’ [4]

The latest additional downloadable content for Syndicate, however, seeks to bring a female-centric narrative to the fore in a way that the main game does not. This Jack the Ripper mini-game is set two decades after the main narrative and sees Evie return to London from India at the time of the Whitechapel Murders, only to find ‘The Ripper’ has kidnapped Jacob. Now, with Evie as the principal player character, the player must follow the Ripper’s trail, rescue her brother and engage in a number of side quests involving rescuing sex workers from brothels run by gangs and humiliating men that buy sex in the back streets of Whitechapel. 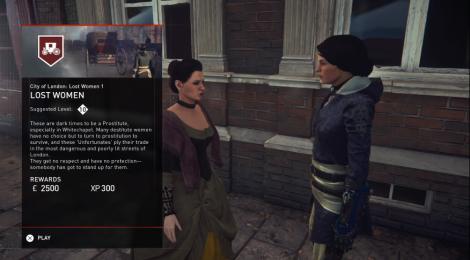 This follows a pattern set with downloadable additional mini-games to previous Assassin’s Creed instalments. 2013’s Black Flag, set in the ‘Golden Age of Piracy’ in the 1720s, touches on the issue of slavery but, like Syndicate with sex work, does not really engage with it until the additional downloadable mini-game Freedom Cry. This additional content features escaped slave Adéwalé liberating other enslaved people in pre-revolution Haiti. In both cases, there is perhaps a feeling that this darker side to history is better explored in an additional spin-off rather than the main game (which, tonally, is a light-hearted romp), as well as the fact that featuring a privileged white male protagonist liberating slaves and sex workers would result in an uncomfortable ‘white saviour’ narrative.

Evie, rather than Jacob, feels far more comfortable as a character to whom sex workers would turn for assistance and who is engaged with their concerns and, specifically, with their safety. Like the prostitutes she rescues, Evie the secret assassin is a transgressive figure within the strict morals of the day; these street walking flâneuses are the female equivalent of the more respectable male flâneur. This dichotomy of archetypes was identified in Janet Wolff’s influential 1985 essay on ‘The Invisible Flâneuse’ in which she outlines the female cast of characters in Charles Baudelaire’s image of walking in the city – the prostitute, the lesbian, the murder victim, the unknown passer-by – and concludes that Baudelaire’s city is one of men of all types and transgressive women. [5] While there are a variety of male characters in the story, all the women in Syndicate: Jack the Ripper do indeed fall into Wolff’s categories. They are murder victims as problems for Evie to solve, prostitutes as objects to be liberated or distractions to divert male enemies, and background characters whose micro-narratives only serve as set dressing to make the streets feel lived in. 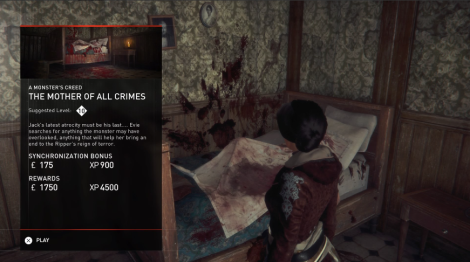 The crime scenes at which Evie investigates the deaths of the real victims of the Whitechapel Murders are rendered accurately in such a way that suggests Ubisoft have done their research in contemporary sources (as are the ‘Ripper letters’ and the false suspects put forward by journalists that Evie must investigate and debunk), but although this shows the same commitment to realism in the environmental details as in the main game, it does not show the same respect to these real women as telling some of their life story would have done.

As a transgressive protagonist who differentiates herself from the series’ usual gung-ho white male adventurers, however, the middle-aged, more cautious Evie is an interesting figure around which to build the game environment. That environment – the city streets through which she walks – also remains the game’s most expressive element, giving a real feel of a city on the brink of all-out panic, the same recognisably familiar streets from the main game now feeling more oppressive and the woman that walks alone through them more vulnerable.

In The Guardian interview, Harris expresses the concern that using the Whitechapel Murders as a way in to the stories of ordinary London women of the 1880s could result in something as disastrously mishandled as the controversial switch of a proposed East End women’s history museum into the ‘Jack the Ripper Museum.’ While Syndicate: Jack the Ripper avoids the worst sensationalism and hypocrisy of that project (not least because a video game adventure has less responsibility in terms of accurate representation than a museum), it is guilty of mythologizing the unknown perpetrator of violent real world crimes as a master criminal. Perhaps it would have done better to follow the path of other recent popular neo-Victorian narratives such as Penny Dreadful and Ripper Street, which are set in the immediate aftermath of the Whitechapel Murders and are thus able to tap into the still resident fear on the city streets and use the figure of ‘The Ripper’ as a reference point for both audience and characters in understanding each show’s fictional atrocities, without actually dramatizing the real world crimes. 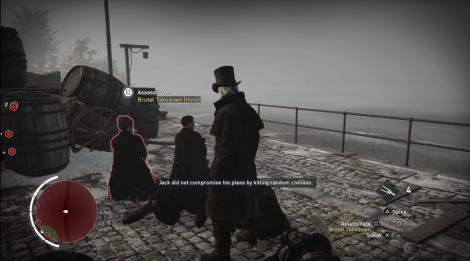 Ultimately, the Jack the Ripper downloadable content asks bigger, more troubling questions than the lighthearted historical adventure of the main Assassins Creed Syndicate game. The result is something with less clarity and simplicity, and a less comfortable gaming experience. (Sequences which ask you to play as the Ripper appear to want to ask the player to consider whether the game’s sneaky assassin ‘hero’ is really all that different from this historic serial killer, but end up proving deeply unpleasant and uncomfortable to play). Ubisoft’s willingness to engage in a controversial area and build a game tackling a subject like violence against women around an interesting female protagonist should be commended, but there is perhaps a need for greater sensitivity and nuance in their next game.

[2] See, for example, Charlie Brooker, ‘The internet: The toughest game in town – if you’re playing as a woman’, The Guardian 20 October 2014, online <http://www.theguardian.com/commentisfree/2014/oct/20/gamergate-internet-toughest-game-woman-enemies&gt;