Miranda Butler is a PhD student at the University of California, Riverside, where she studies Victorian reading and writing practices, historical media technologies, and evolutionary discourse.

As Tea Obreht has argued, vampires can be read as a “cultural necessity,” an adaptable product of a society’s fears and obsessions.[1] Scholars have analyzed Sheridan Le Fanu’s  Carmilla, originally published serially in four parts from 1871-1872,  for its engagement with numerous Victorian concerns,[2] but as the story has aged, it continues to lend itself to reinterpretation. Nancy M. West theorizes that this is because the novella “is marked by narrative gaps, abrupt transitions, and, because of its multiple framing devices, a peculiar sense that the author has vanished into the story.”[3]  Film and television’s most recent adaptation of the novella embraces this reinterpretable nature of Le Fanu’s work to reimagine the Victorian vampire as she is both mediator of, and mediated by, the culture and technologies of her past and present (un)lives. 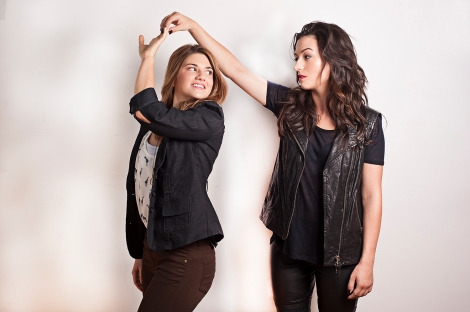 In season 1 of Carmilla, Laura and her friends at Silas University — which the show’s creators named in homage to Le Fanu’s Uncle Silas — connect Laura’s roommate Carmilla to a string of missing girls on campus.

Created by Jordan Hall and Ellen Simpson, the Canadian web series Carmilla premiered on August 19, 2014 on the Vervegirl (now called KindaTV) YouTube channel. The series begins as the bubbly and studious twenty-first century college student Laura Hollis starts her first year at Silas University, “in picturesque Styria [Austria], where nothing, not even the homecoming goat sacrifice, disturbs the pursuit of knowledge.”[4] Producer Steph Ouaknine describes the show’s imaginative setting as a “Buffy meets Night Vale tone;”[5] it seems like a relatable, present-day school with some additional fantastical elements, and the inhabitants of the world accept entities and events that could only exist in fantasy, science fiction, or other genres of the weird.

When Laura’s dorm roommate, Betty Spielsdorf, joins a growing list of girls at Silas who have mysteriously disappeared, Laura starts a “journalism project” to investigate. Episodes of Camilla take place entirely through Laura’s 2-to-7 minute long single-cam vlog (video blog) entries, which she posts online as the story unfolds for her fictional “viewers”—that is, every Tuesday and Thursday for the show’s YouTube audience. Putting a new spin on the multiple framing devices and compilation styles of Victorian vampire stories like the original Carmilla and Dracula, the show also pushes serial media to the next level by employing “canon transmedia.” That is, creators of the series run official social media accounts for the fictional characters, which provide additional storytelling elements in between episodes and seasons.

Carmilla’s main plotline begins when the school assigns Laura a new roommate—the sarcastic, leather-clad, “outwardly apathetic but inwardly miserable,”[6] Carmilla Karnstein. After Carmilla’s unusual habits reveal that she is a vampire, Laura assumes that she is responsible for the recent disappearances on campus. Carmilla is now nearly 350 years old instead of about 150 at the time Le Fanu’s novella was written: she has lived through the Enlightenment’s “birth of a new world in science,” the political and intellectual revolutions that ushered in a “new age” in the 1790s,[7] both the nineteenth and twentieth centuries, and the turn of the new millennium. 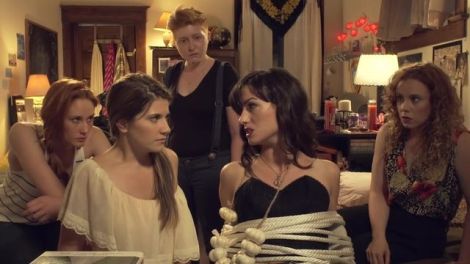 In season 1 of Carmilla, Laura and her friends at Silas University — which the show’s creators named in homage to Le Fanu’s Uncle Silas — connect Laura’s roommate Carmilla to a string of missing girls on campus.

But these layers of experience have changed Carmilla. When an impending apocalypse threatens the school, Laura and her friends—including an upbeat, neurotic resident assistant named Perry (adapted from Le Fanu’s motherly governess Perrodon), and a non-gender-binary science enthusiast named LaFontaine (adapted from Laura’s “finishing governess”)—must ban together in order to save the day, and Carmilla steps in to help. Laura’s father is only mentioned in passing, and most of the male characters belong to a simple-minded, though well-intentioned and helpful, fraternity of “dudebros.” These character choices eliminate the need for Laura to be rescued from Carmilla by her father and his male friends, and instead, reposition Laura, Carmilla, and the previously passive, minor female characters as the heroes of the story. LaFontaine, rather than Le Fanu’s Baron Vordenberg or Stoker’s Dr. Seward, is their source of scientific expertise; and internet access, rather than Le Fanu’s General Spielsdorf or Stoker’s Van Helsing, allows the characters to uncover, for themselves, the historical and mythological information that they need.

In this way, updating Carmilla through contemporary webculture allows the show to successfully reinterpret the Victorian vampire story from a feminist perspective. Unlike Dracula, whose books and newspapers are out-of-date,[8] and whose lack of interest in Jonathan Harker’s shorthand marks him as the enemy,[9] Carmilla is plugged into both her past life as a vampire who has “lived through half of European history,”[10] and completely up-to-speed with the culture and technologies of her millennial peers. Similar to Buffy or Gilmore Girls, the main characters, including Carmilla herself, speak in a way that is saturated with pop culture references. Thus, Carmilla is the instantiation of Obreht’s vampire as cultural repository: since the turn of the seventeenth century, her engagement with various media objects, which she can continually access through her phone and computer, keeps her connected to humanity. For example, she taught herself to read Sumerian in 1871 because she wanted to read Gilgamesh; but at the same time, when she is looking through a Sumerian tome to help Laura and her friends, she describes its content as being “in the all-hail and cower-muling-worms vein.”[11] This exemplifies her dual identity as both a centuries-old vampire and technologically savvy millennial: her adjectival use of “all hail” references the podcast Welcome to Night Vale (2012-present), the new media sensation that partially inspired the genre of the web series.

As in Le Fanu’s original, a romance develops between Laura and Carmilla, but instead of sensationalizing this relationship, the series takes a more sophisticated approach to all of its character dynamics. Laura and Carmilla have both been romantically involved with other women in the past, yet, platonic female friendships are also critically important to the show, and the series suggests that male/female relationships are a possibility. In this way, Carmilla repositions its core characters as a sort of queer utopian community in a speculative fictional world where, as José Muñoz explains, “queerness is not quite here; it is […] always a potentiality.[12] And when the characters, whether vampire or not, human or otherwise, ban together to save the world, their “multiple forms of belonging in difference adhere to a belonging in collectivity.”[13]

Thus, Carmilla the series has rightfully earned several AfterEllen Visibility awards,[14] and it imagines a way of relationality which Rosi Braidotti might also describe as posthuman. It “displace[s] the dialectical scheme of opposition” by unhinging categorical boundary markers in favor of “alternative modes of transversal subjectivity, which extend not only beyond gender and race, but also beyond the human.”[15] The show’s proposed gender and relationship fluidity is complicated even further by a budding romance between LaFontaine and J.P., a completely non-physical character who was once a male Silas student, but is currently trapped entirely in cyberspace, as digital information inside a computer.

As season two (2015) picks up, the show starts to look more Victorian, while nonetheless, further subverting Le Fanu’s problematic representation of gender and sexuality. The characters leave their contemporary dorm room to move into an abandoned Victorian mansion, and as the episodes continue, they begin dressing in a neo-Victorian style as they slowly embed themselves into a fictionalized aesthetic of Le Fanu’s time. Gesturing back to the original story, the show introduces the vampire hunter Baron Vordenberg, a direct descendent of the baron from Carmilla’s past, as a potential ally, only to reveal that his outdated, patriarchal Humanist views are a danger to Laura and Carmilla, to LaFontaine and J.P., and to the fate of the school. 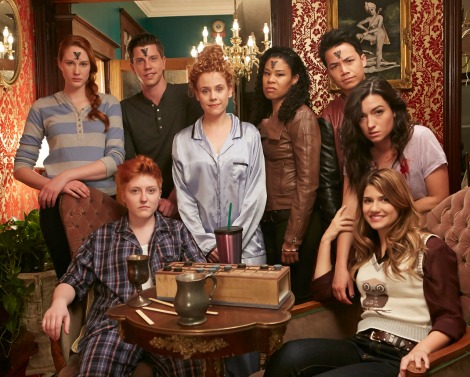 In season 2 of Carmilla, the characters relocate to a new headquarters with a more seemingly Victorian aesthetic. Yet, even as the show harks further back to Le Fanu’s original setting, its female heroes use contemporary media technologies to wrest both information and power from the hands of the patriarchy, and save both themselves and the world from an impending apocalypse.

At the end of the second season, rather than utilizing the Baron’s collection of obsolete media objects to destroy the vampire (as in Le Fanu’s story), the plot calls upon its heroes to use the baron’s obsolete physical media against him. This sets up the show for its upcoming finale, which will undoubtedly continue to dismantle binary oppositions and remediate the relationship between the Victorian vampire’s historical past and the re-vamped Carmilla’s millennial present.

The third and final season of the show will air later this summer, though an exact release date has not yet been announced.