Briony Wickes is third year AHRC PhD student in the English Department at King’s College London. Before this she completed her BA and MA in English Literature with Victorian Studies at the University of Exeter. Her current research project argues that animal bodies are integral to the conceptual and material work of nineteenth-century settlement in the New World, focusing on different historical and literary representations of the settler colonial animal industries, including sheep-herding, the fur trade, the feather industry, and whaling. She can be found on Twitter @brionyjoy

Entitled ‘Nicholay; Furs’, the image below is part of a series of photographs taken at the 1851 Great Exhibition. Located on the ground floor of the North-West Transept of the Crystal Palace, the picture shows the display of furs and skins fashioned and formed into different garments, curated by the Oxford Street furrier, J.A. Nicholay and Sons. Placed on a plinth, the furs are organised in a hierarchical manner, ascending in order of cost. A large ermine robe, for example, the kind that would only have been worn for royal coronations, takes it place at the top, representing the most expensive and luxurious of garments, whilst two small coats for children feature at the bottom of the display. Other exhibited articles include fur muffs, fur-backed chairs, long pelts and pelisses, and a fur-lined crown at the centre of the exhibit. A smaller glass case of skins, belonging to another London furrier, George Smith and Sons, is also a part of the display, yet somewhat overshadowed by the large, unavoidable advertisements for ‘Nicholay’. Completing the collection, a variety of decorative stuffed and mounted animals are featured, including a lion, a leopard, two raccoons, a gazelle, a beaver, a wolf, a penguin, two stoats, and a mounted tiger head, baring its impressive teeth and branded with the Nicholay name. 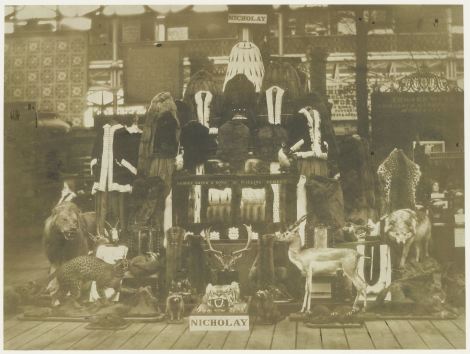 The fur display is certainly an arresting tableau and the effect was not lost on the Exhibition’s viewing public. The Morning Paper noted that the display was “generally much noticed and admired by the various visitors” and “deserved the attention of all interested in the development of British industry and skill”.[1] In personal accounts of the Crystal Palace, spectators marvelled over the collection’s “beautiful softness”, “fine colour and lustre”, and density “like the richest velvet”.[2] Queen Victoria, herself, was also reportedly impressed with the stand, visiting “more than once” and “commending many of the articles”, in particular the “seal and the beaver […] and a very handsome hearthrug, composed of a centre piece of wild cat skin and a deep fringe composed of the skins of the black African monkey”.[3]

For many visitors, this would have been the first time that they had seen such a vast range of animal skins in one place. The global scope of the fur stand was unmistakable: as the Exhibition Express and Daily News noted, “skins from almost every animal” were there to be seen, “from the royal lion and Bengal tiger, down to the domestic rabbit”.[4] Organised in such a manner, the entire natural world appeared, rather tantalisingly, to be at the viewer’s fingertips.

As Jeanne Cannizzo has argued, the Great Exhibition can be compared to a “cultural text” that may be read in order to better understand “the underlying cultural assumptions that have informed its creation, selection, and display”.[5] As with many of the showcases at the 1851 Exhibition, Nicholay’s display of skins in the North-West Transept participates in that event’s broader ideological agenda. Showcasing animal skins sourced from all over the globe in the heart of fashionable London, the display articulates a narrative of colonial domination in keeping with the triumphant rhetoric of the Exhibition.

Yet the photograph also offers an insight into how fur as a consumer good was perceived in the nineteenth century. On the one hand, the display asserts man’s technical prowess. The variety of garments on show is an attempt to demonstrate the artistry of the furrier Nicholay and to boast the range of his skills. The repeated appearance of the Nicholay brand throughout the display claims the skins and pelts as his work, transformed uniquely by his hand. On the other hand, however, the animal, itself, remains present. The focus is not solely on Nicholay’s luxurious fashions, but also on the stuffed creatures that surround the exhibit. The inclusion of the taxidermy, a deliberate decision by Nicholay according to official Exhibition reports, connects the fur garments directly to their vital origins – to grunting, wailing, breathing, breeding, fleshy animal bodies.

Scholars working within the field of animal studies have tended to draw our attention to the ways in which living creatures are lost within the contemporary consumption of animal products, replaced by disaggregate material that no longer looks like animals, which in turn allow the user to forget or ignore the violence and exploitation at the heart of animal industries.[6] The fur display at the Great Exhibition, however, provides an alternative vision of human relations to commercial animal products. The taxidermy, as much a part of the exhibit’s appeal as the fur fashions themselves, suggests that nineteenth-century consumers did not seem to mind being confronted with the vivid animal origins of their garments.

Perhaps we could even suggest that the Victorians had a morbid inquisitiveness to see where their furs had come from. A further survey of the materials linked to the nineteenth-century fur trade seems to support this. Furriers would use insets of hunting scenes on illustrated advertisements for their wares, whilst fashion journals and lifestyle magazines would also provide detailed accounts of the operations of the trade. Charles Dickens’s Household Words, for example, ran a four-part series of articles in 1886 entitled, ‘Sealskin and Where it Comes From’, in which the author describes, in a rather matter-of-fact manner, how “seals are dragged out by the hind flippers. Each sealer takes his long knife and drives it between the fore flippers right into the heart, the blood gushes out and life is extinct”. Unperturbed by slaughter, the author concludes that the process could even be called humane, as the seals appear to go willingly to “the killing-ground” and were “allowed to cool down” before the clubbing commences.[7]

‘Seal-Skinning on the Floes’, engrave by E Werenskiold, 1890.

Clearly, opinions about what constituted cruelty towards animals were subjective. The fact that Victorian journalists and advertisers did not believe they ought to conceal grisly details of the fur trade is striking. It reiterates a familiar narrative of humankind as ruthless consumers, buying desirable fashions irrespective of the potential for suffering or detrimental ecological impacts. But it also offers a more complex response to the consumption of animal goods beyond a simple ‘out of sight, out of mind’ mentality. As the 1851 display suggests, for nineteenth-century consumers, at least, we can argue that there remained a sense of curiosity and even, potentially, of connection to the animal origins of their products. The animal body is not hidden from consumer view but, like Nicholay’s taxidermy, lurks at the forefront of Victorian culture, reminding fashionable ladies and gentleman of the era exactly where their furs had come from and that their fur scarves, coats, and hats had once even been alive.

[2] William Gaspey, Tallis’s Illustrated London; in Commemoration of the Great Exhibition of All Nations in 1851, Forming a Complete Guide to The British Metropolis and Its Environs. (London: John Tallis, 1851), pg 30.

[3] Nicholay, himself, confirms the Queen’s interest in the display. Recording his own experience of the Exhibition in a book published in 1852 after the close of the Crystal Palace, Nicholay writes that the Queen, Prince Albert, and King Leopold I of Belgium visited the display of skins and furs by appointment on the 17th of June and that he was commanded to be in attendance for the purpose of furnishing the royal party with any information that they might require. The Queen was so pleased with the display that she ordered “dresses of the rich Fur Seal” for herself and for the Royal Children from Nicholay’s stand, whilst Prince Albert bought a coat made of “tartar foal”. J.A. Nicholay, Historical Account of Skins and Furs: Brief History of Furs and the Fur Trade, Their Statistics and Use, Compiled for General Information with A Description of the Collection Exhibted by Messrs Nicholay and Son in The Great Industrial Exhibition, Including Hints for the Preservation of Furs (London: 82 Oxford Street, 1851), pg 30.

2 responses to “Consuming Furs at the 1851 Great Exhibition”