Sarah McFee is a MA English graduate from Teesside University. Her research focuses primarily on disability in the Victorian Gothic and representations and constructions of gender and race in Neo-Victorian fiction. You can connect with her on LinkedIn.

Both Valerie Martin’s Mary Reilly (1990) and Theodora Goss’s The Strange Case of the Alchemist’s Daughter (2017) provide voices to silent or marginalised female characters either directly or indirectly related to Jekyll and Hyde. However, Martin’s and Goss’s ‘case studies’ add new layers of meaning to the original novella rather than providing a feminist challenge to the original male author. Though both authors’ use of female characters draws attention to original literary inequalities of gender as a result of a Victorian patriarchal society, they also challenge the already existing interpretations of adaptations that automatically insist on polarising them against the original. Mary Reilly and The Alchemist’s Daughter include original, modern, revisionary female characters but simultaneously establish a respectful link to their source text, mainly through the use of metaphoric and physical father figures.

Natalie McKnight argues that “Victorian fathers offer particularly fascinating material since the role of fathers changed dramatically during the nineteenth century as the Industrial Revolution removed fathers’ work from the home and the cult of motherhood began to monopolize parenting”.[1] Nonetheless in both texts the figure of the mother is mostly absent and fathers are not positioned in opposition to maternal women. Instead, knowing the father and accepting that they have influenced them is what helps to advance each female character’s narrative. Within Martin and Goss’s novels, instead of the father figuring as a metaphor for patriarchy, accepting the impact of their paternity is what enables the characters to discover who they really are. Additionally, in The Alchemist’s Daughter, by investigating their father’s actions, Goss’s group of female characters can ultimately find each other and a sense of belonging. Consequently, it is also evident through the adaptation of the canonical text that both authors perceive Stevenson as a fictional authorial father who has inspired them to write their stories and who lovingly exists in the background of their narratives; instead of challenging the past and the Bloomian ‘anxiety of influence’, the figure of the ‘auteur’ is embraced.

In Mary Reilly, Jekyll initially exists as a father figure for Mary, who is a maid within his household. He occasionally refers to her as ‘child’ and they rely on each other for advice and emotional fulfilment. It is Jekyll’s questions that encourage Mary to confront her own emotional fragility that exists because of her father’s abuse. However, it is also Mary’s words to him regarding her father that make Jekyll question the evil he has let loose in the form of Hyde:

“With my father, when he was drinking it was as if he couldn’t get enough of seeing suffering, and as I was at hand, it was me he took his pleasure in hurting. He was a different man then – he even looked different, sir, as if the cruel man was always inside him and the drinking brought him out.”

Though Jekyll is paternal, it is Hyde who Jekyll realises is a true representation of Mary’s father. For Mary’s father, alcohol creates the monster; for Jekyll, he creates his own. As the narrative develops, Mary realises that a reason to fear her father exists only in her head, and when she confronts Hyde (who knows all about her abusive childhood) she is really confronting her own father. It is also Jekyll’s paternal feelings towards Mary that prevent Hyde from hurting her; he sees himself as her father figure and does not want her to be hurt again. Consequently, it is Mary’s psychological strength that saves her from being one of Hyde (and Jekyll’s) victims. Ultimately, Mary’s battle with her inner darkness, and her acceptance of the ‘monstrous feminine’ that Victorian patriarchy destroyed, is the tool that enables her to become a true heroine of her own literary tale.

As Dr. Jekyll is a replacement father for Mary Reilly, the women of Goss’s novel all have fathers who are doctors and scientists, and most of them have been ‘created’ or experimented on for the purpose of being their fathers’ greatest scientific achievements. Characters include the daughter of Victor Frankenstein, Dr. Jekyll, Mr. Hyde and Dr. Moreau amongst others. The women ultimately embrace what their fathers made them and consequently overpower the secret society of scientists who try and hunt them down. By bringing all of the ‘daughters’ together, Goss pays homage to the great Victorian classics and combines elements of all of them to create a new literary tale. 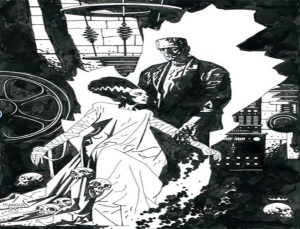 These two novels are influenced by Jekyll and Hyde but are not reliant on the novella for survival; the original storyline instead provides the narrative background which enables the women to gain the ability to embrace their true selves. Oscar Wilde famously argues in his novella The Picture of Dorian Gray (1890) that “the nineteenth-century dislike of Realism is the rage of Caliban seeing his own face in a glass. The nineteenth-century dislike of Romanticism is the rage of Caliban not seeing his own face in a glass”.[3] It appears that theoretical debates regarding adaptation result in a precarious position for all Neo-Victorian texts, which is that they are negatively criticised no matter their authors’ stories. They are perceived as either a poor attempt at copying originals where the original is viewed ‘in a glass’, or alternatively, they are criticised as being too far removed from original novels. Instead, both Goss and Martin occupy a middle ground; the source texts can be found as being the influential vehicles for the narration, but new characters propel these narratives into original ground. Both authors view their source texts as their literary and metaphoric ‘fathers’, respecting their work and authorial decisions and using them to propel their own narratives and create original stories.

3 responses to “Sins of the Father: Embracing the Past in Neo-Victorian Fiction”