Peter Halton is a second year PhD candidate in Intellectual History at the University of Sussex. He researches late-nineteenth century socialist political thought, focusing primarily on William Morris. He can be found on Twitter @lutraline

In comparison to his utopian romance News from Nowhere, William Morris’s A Dream of John Ball is relatively little read. Set on the eve of the Peasants’ Revolt of 1381 and culminating in a conversation between the dreaming Morris and the rascal hedge-priest John Ball, it was a popular text in its day and passages would often be recited at socialist meetings in the late 1880s into the 1890s. Its more lasting impact has been in phrases such as the invocation from John Ball that ‘fellowship is heaven, and lack of fellowship is hell’ and that ‘the deeds that ye do upon the earth, it is for fellowship’s sake that ye do them’.[1] The archaic language, with much use of ‘yea’ and even more of ‘forsooth’, along with the general setting have also contributed to the not unmerited view of Morris as a medieval socialist. 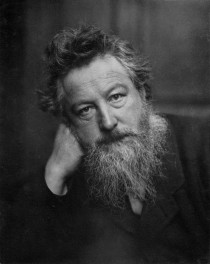 Another often quoted passage from A Dream of John Ball is Morris’s reflection on ‘how men fight and lose the battle, and the thing that they fought for comes about in spite of their defeat, and when it comes turns out not to be what they meant, and other men have to fight for what they meant under another name’.[2] E. P. Thompson, who in both editions of his book on Morris misplaces the passage within the story’s structure, argues that this passage takes us to the central theme of John Ball, ‘Morris’s reflection, from the standpoint of aspiration, upon man’s unmastered history.’[3] Rodney Hilton in his Kelmscott Lecture of 1989 would seem to agree, arguing that the historical portrait given in John Ball and ‘Morris’s linking of changing economic and social structures with the complex history of successes and defeats shows a shrewd insight’ with continuing relevance.[4]

Hilton also argued that the text ‘was not a political tract for the late 1880s but a vision informed by historical understanding.’[5] Without wishing to overstate the text’s power as a piece of political propaganda, Hilton’s assertion to a degree confuses what the story became with what it initially was. What it forgets is that John Ball was originally published in Commonweal, the journal of the Socialist League, the organisation Morris led following its breakaway from the Social Democratic Federation at the end of 1884 until he himself left late in 1890. Serialised in weekly instalments between November 13th 1886 and January 22nd 1887, the text appeared inside the journal with no fanfare or explanatory introduction. It was presented as any other article or series of articles designed to inform, educate, and persuade its readers. When published in book form in March 1888 by Reeves & Turner with Edward Burne-Jones’s illustration of Adam & Eve, some textual additions were made and chapter breaks, absent from the serialised version, were also added.

When read as a more directly political tract other dimensions of the text start to emerge. One in particular is its emphasis on the notion of freedom. This has both a historical aspect, in the fight against serfdom and villeinage, and a contemporary one, in an analysis of the unfreedom of wage-labour. This theme is apparent in the dreaming Morris’s first interaction with a villager when he is asked ‘whose man art though?’ Morris replies that he is no one’s man, that ‘I am my own master’ to which the villager grins saying ‘Nay, that’s not the custom of England, as one time belike it will be.’[6]

The fullest discussion of this theme comes later in the story, during the talk between Morris and Ball in the church. Morris describes to Ball what will happen between 1381 and his own time, how men shall indeed be freed from villeinage and lack masters as Ball understands them, but that they will also be cleared from the land and denied the ownership of that which they need to subsist. This section of the story (Chapter X) bears close resemblance to the account given by Karl Marx in Part Eight of Capital, on ‘The So-Called Primitive Accumulation’ where the historical process which culminates in the ‘free labourer’ is put forward. Although Morris first read Capital in 1883 (in French) it is highly likely at this point he was reading it again, this time in the English translation just published. This translation appeared at the end of the 1886 (an advert for it first appeared in the November 20th issue of Commonweal) and the corresponding section of John Ball was in the January 1st 1887 edition of Commonweal.[7]

For Marx the creation of the free labourer was a necessary condition for the development of the capitalist system of production.

In his story Morris places his explanation of this process and concept within a discussion between Morris and the uncomprehending John Ball, highlighting to his readers their own unfreedom in their status as free labourers. Ball states that ‘I know a free man, and he is his own always; but how shall he be his own if he have nought whereby to make his livelihood?’ Morris explains that, not owning the means of production, the labourer ‘must needs buy leave to labour of them that own all things except himself and such as himself.’ Only owning himself, with ‘himself then shall he buy it… with his body and the power of labour that lieth therein; with the price of his labour shall he buy leave to labour.’ Here Morris makes the important distinction that the labourer doesn’t actually sell themselves to the capitalist but their labour power, with the fact peculiar to the labour commodity that it is inseparable from the body of its seller. Morris continues his explanation that the free labourer ‘shall sell himself, that is the labour that is in him, to the master that suffers him to work, and that master shall give to him from out of the wares he maketh enough to keep him alive, and to beget children and nourish them till they be old enough to be sold like himself, and the residue shall the rich man keep to himself.’ Still not entirely comprehending what Morris says, Ball’s position as an outsider to this system allows him to see that ‘man may well do what though sayest and live, but he may not do it and live a free man.’[9]

That the working class were in a position of unfreedom was a common refrain of socialist politics in the 1880s. Despite, as mentioned, the important difference between slavery and free labour, the wage labourer was often described as being in a condition of wage slavery. James Leigh Joynes, a former Eton schoolmaster, wrote in the pages of Commonweal that most workers hadn’t understood ‘that if he is under compulsion to expend his labour for the benefit of others, it is indifferent whether that constraint is enforced by an individual or a class, and his condition as a slave is not affected thereby.’[10] A Dream of John Ball also goes on to use the language of slavery to describe the workers.

So, while A Dream of John Ball can indeed be seen as Morris’s reflection on the historical process of change, it can also be read as more than that. Morris here uses his imaginative faculties, as he would later in News from Nowhere, to expand the ways in which socialist education and propaganda was delivered. By placing the text back into its original setting in a propaganda weekly we are also prompted to read it differently and to ask ourselves what Morris was trying to say or explain to his readers.

[1] Commonweal, November 27, 1886, Ch. IV ‘The Voice of John Ball’. My preference is to cite from the original appearance in Commonweal, chapter references are also given which apply to all later versions. The full text with chapter divisions can be found online at https://www.marxists.org/archive/morris/works/1886/johnball/johnball.htm

[4] Rodney Hilton, The Change Beyond the Change: A Dream of John Ball. London: William Morris Society, 1990.

[7] Although available from late 1886, this translation of Capital bears the date 1887 as this was the copyright date. My thanks to Dr Cath Feely for clarifying this point to me.