Dr Lauren Alex O’Hagan is a research associate in the Centre for Language and Communication Research at Cardiff University. Her current project is entitled ‘Reading, Writing and… Rebellion: Understanding Literacies and Class Conflict Through the Edwardian Book Inscription’ and is funded by the Economic and Social Research Council. Her research interests and publications focus largely on class conflict, literacy practices and consumer culture in late Victorian and Edwardian Britain using a multimodal ethnohistorical lens.

The ‘New Woman’ was a term that emerged at the end of the nineteenth century to describe women who fought against conventional ideas about womanhood in society and challenged the old codes of conduct and morality. Although the origins of the term are disputed, it is believed to have been first used by the Irish writer Sarah Grand in an 1894 article that addressed the double standards inherent in Victorian marriages regarding male and female sexual virtue. The term was quickly picked up and employed by the English writer Ouida in an essay about modern-day women, and was further popularised by the writer Henry James who used it to describe the growing number of feminist, educated, independent women in Europe and the United States.[1] In her work on Henrik Ibsen and feminism, Gail Finney[2] provides a precise definition of the ‘New Woman’:

The New Woman typically values self-fulfillment and independence rather than the stereotypically feminine ideal of self-sacrifice; believes in legal and sexual equality; often remains single because of the difficulty of combining such equality with marriage; is more open about her sexuality than the ‘Old Woman’; is well-educated and reads a great deal; has a job; is athletic or otherwise physically vigorous and,  accordingly, prefers comfortable clothes (sometimes male attire) to traditional female garb.

According to Buzwell,[3] the qualities and characteristics that came to define the ‘New Woman’ had existed for some time and were clearly embedded in the literature of the 1880s. ‘New Woman’ fiction expressed dissatisfaction with the contemporary position of women in marriage and in society and often depicted female heroines riding bicycles, travelling alone, wearing shorter and lighter clothing, resisting enforced marital sex, accessing birth control information and insisting on the right to vote.[4] Perhaps surprisingly, many of these themes were promoted by ‘New Women’ through the medium of pictorial bookplates, which offered a semi-public platform to express these new and often controversial beliefs.

Although bookplates had existed since the sixteenth century, up until this point, they were predominantly armorial in design and owned by male members of the upper class who commissioned artists to create images of their coat of arms. However, in the late nineteenth century, the idea of commissioning bookplates to reflect an owner’s occupation and personal interests grew in popularity. Pictorial bookplates offered new ways for women in particular, who had been largely excluded from armorial designs, to express their personal identity, giving them the freedom to pick and choose which elements of their personality to assert. Below, I will outline two of my favourite examples that I have come across and provide some background information on each owner. 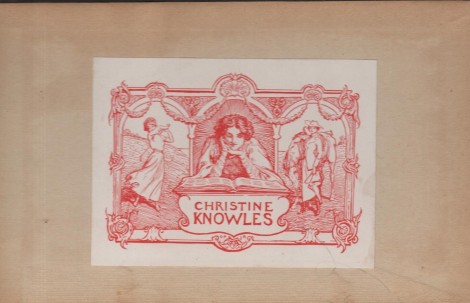 This striking red lithographic bookplate was found in a 1908 copy of The Defence of Guinevere by William Morris and belonged to Christine Knowles. The bookplate is decorated by an Art Nouveau border, which frames three self-portraits of Christine.

In the first, Christine is shown playing golf – a sport of the ‘New Woman’ –  and is holding the club over her shoulder in a backswing position. Many men felt that women were constitutionally and physically unsuited for golf and would not be able to deal with the ‘struggle’ of bad weather or long hours of playing.[5] Christine’s self-portrait boldly defies this belief; her white blouse and long ‘bicycling’ skirt also signal her independence, flouting the traditional golf dress for women of crinolines, bustles and petticoats.[6]

On the right-hand side, Christine is portrayed standing next to a horse. Again, her code of dress – including a skirt that reveals part of her ankles – overtly signals her identity as a ‘New Woman’. This is further emphasised by the fact that she is leading the horse alone, indicating her control and autonomy.

The middle image shows Christine with her head in her hands engrossed in a book. At this time, women’s silent reading was seen as dangerous because it was believed that it would encourage provocative thoughts and foster a private fantasy life that would corrupt their femininity.[7] Here, Christine’s silent reading is an act of defiance, particularly strong if we consider that the bookplate appears in The Defence of Guinevere: a poem about Queen Guinevere’s defence to an accusation of adultery, which enabled Morris to discuss love and sexual desire in an unusually candid way for the period.

Christine was the daughter of a merchant and was born in London in 1890. At 20 years old, she attended the Royal College of Science and lived at Alexandra House in Kensington – a hostel for educated young ladies who were “keen to become independent and able to earn their own living training at music, art and science schools.”[8]

Upon the outbreak of the First World War, Christine volunteered with the Red Cross, packaging food parcels for prisoners of war. However, keen to have more direct contact with these prisoners, she established the British Prisoners of War Food, Parcels and Clothes Fund in 1916. She was also a delegate to the Government Committee on the Treatment of Prisoners of War by the Enemy and founded the After Care Committee for British Prisoners of War, receiving an OBE in 1919 for her services. During the Second World War, Christine relaunched her scheme under the name ‘British Prisoners of War Books and Games Fund and Forget-Me-Not League’, sending books, games and tobacco to prison camps. Records show that Christine never married or had children; instead, she travelled widely on her own, visiting Canada, USA, Puerto Rico and Brazil. She died in Maidstone, Kent in 1965. 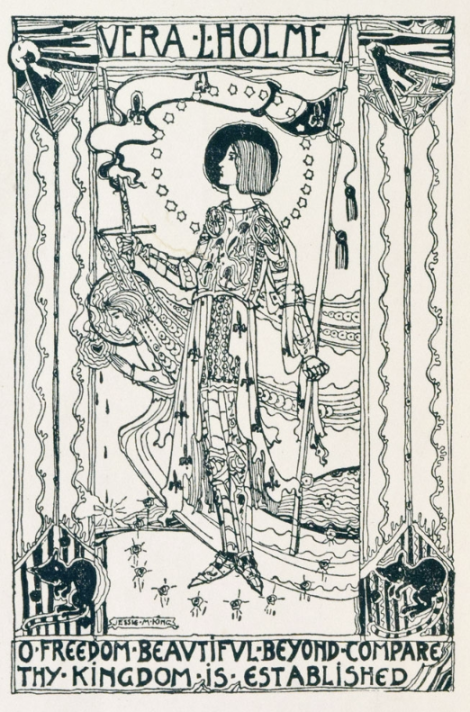 This pen and ink bookplate belonged to Vera L. Holme and was found in a 1907 copy of Jock of the Bushveld by Sir James Percy Fitzpatrick. Vera’s bookplate was designed by the artist Jessie M. King and shows her depicted as Joan of Arc – the national heroine of France who led the French army to victory over the English at Orléans in 1430.

Vera L. Holme – known as Jack – was the daughter of a timber merchant and was born in Birkdale, Lancashire in 1881. At the age of 22, she decided to become an actress and moved to London. Here, she developed a strong interest in the campaign for women’s suffrage and joined the Actresses’ Franchise League in 1908 – a group of theatre professionals who used literature, propaganda plays and lectures to foster support for the cause. As part of the League, Vera regularly performed at the gates  of Holloway Prison to boost the morale of the suffragette prisoners inside. She was also a member of the Women’s Social and Political Union (WSPU) and moonlighted as Emmeline Pankhurst’s chauffeur. During the First World War, Vera served as an ambulance driver in Serbia and Russia as part of the transport wing of the Scottish Women’s Hospital unit. She was also a founding member of the private ‘Foosack League’ – a lesbian secret society – and had a long-term relationship with Lady Evelina Haverfield. She died in Glasgow in 1969. 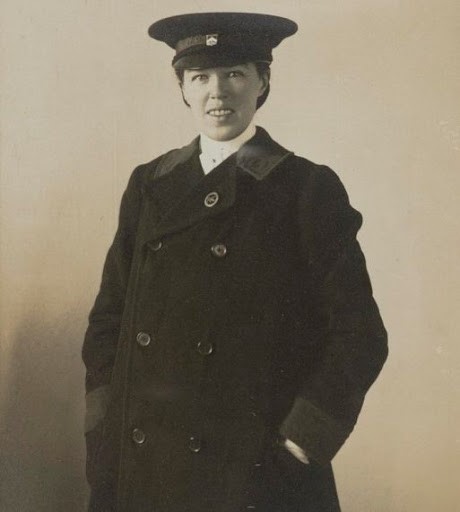 Vera’s choice to depict herself as Joan of Arc in her bookplate is significant because iconography of this historical figure was revived in the early twentieth century by the suffragettes who saw her as a feminist icon.[9] They dressed up as Joan of Arc in demonstrations, marched with banners emblazoned with her image and used her picture on posters to promote the WSPU’s magazine. Here, Vera’s self-presentation as Joan of Arc granted her symbolic power at a time when she was denied political power in real life and also subtly singled her out as a member of the WSPU. The strength of the image is accentuated by the strapline “O freedom beautiful beyond compare thy kingdom is established,” taken from Edward Carpenter’s Towards Democracy – a poem that expressed his own vision of a free world which embraced direct democracy. Hart[10] notes that history painting in the Edwardian era invited a “participatory response” from viewers, who would thereby be implicated in a moral cause. Vera’s bookplate functions in this way by drawing upon the rhetoric of martyrdom, sacrifice, honour and chivalry to encourage a call to arms in support of the social campaign of the ‘New Woman’ suffragettes.

Christine and Vera’s bookplates show how the medium could be empowering, offering women new opportunities to explore options of identity, exercise free speech, practice self-reflection and challenge the status quo. By combining analysis of these seemingly insignificant visual artefacts with archival research, we can unearth the stories of many forgotten women who played a leading role in the ‘New Woman’ movement and ensure that they are not forgotten.

For further reading on this topic, please stay tuned for my monograph Social, Communicative and Performative Functions of Edwardian Book Inscriptions which will be published with Routledge in spring 2021.

[8] Louise Irvine and Deborah Lambert, 1997. ‘“For present comfort and for future good” Queen Alexandra’s House, Kensington, The Journal of the Decorative Arts Society 1850 – the Present, 27.