Isobel Sigley is a first-year PhD candidate at Loughborough University. Her doctoral research project explores women’s short fiction in the late-nineteenth and early-twentieth century and the role of the haptic senses in the context of first-wave feminism. Centring on the New Woman movement of the fin de siècle, the project seeks to negotiate the boundary between the Victorian and the modern by charting the sensory and affective ‘feeling’ of female characters through an analysis of their contact with objects. Get in ‘touch’ through twitter (@isobelsigley) or email (i.sigley@lboro.ac.uk). 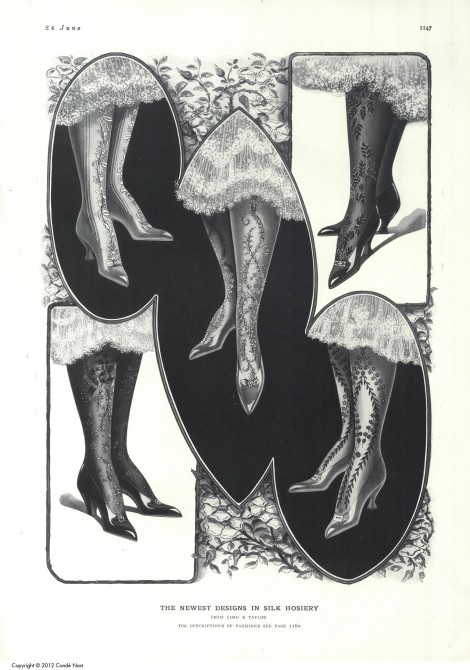 An article appearing in the London Journal Ladies’ Supplement in 1898 glorifies ladies’ stockings. A must-have in any Victorian woman’s wardrobe, the “comfort” of each wearer relies upon her stockings: “No one can be tranquil in demeanour and at ease in her mind with a foot-covering which blisters the skin, or creases up in folds beneath the shoe, or in any way makes itself felt as a disagreeable fact.”[1] The article states that “a stocking should be as unobtrusive as the skin itself” and tell us, “A silk stocking is a luxury, and a pair of silk stockings is always an appropriate gift highly esteemed by most women. A box of silk stockings is a royal present, and costly enough for a queenly purse.”

Here, the stocking channels femininity, laced with the gendered qualities of tranquillity and ease, as well as the more implicit appeals to smoothness and inconspicuousness. Moreover, by likening stockings to the skin, this article endorses an interesting, if unsurprising, ideology about women’s skin: it was, or rather should be, unobtrusive. This then implies that a woman’s body should be unnoticeable and easily ignored, ultimately inactive. As such, one might say that the stocking serves towards the immobilisation female agency.

Or rather, should immobilise female agency. Kate Chopin’s short story, ‘A Pair of Silk Stockings’, published in Vogue in 1897, depicts the very opposite: a stocking which empowers.

Feeling flush with an unexpected windfall of fifteen dollars, Chopin’s protagonist Mrs Sommers enters a department store with her children’s worn and torn clothes at the forefront of her mind. Eager for bargains to revamp their wardrobes, Mrs Sommers, dizzy after having skipped lunch, steadies herself against a counter, whereupon she accidentally finds something altogether more indulgent:

An all-gone limp feeling had come over her and she rested her hand aimlessly upon the counter. She wore no gloves. By degrees she grew aware that her hand had encountered something very soothing, very pleasant to touch. She looked down to see that her hand lay upon a pile of silk stockings. A placard near by announced that they had been reduced in price from two dollars and fifty cents to one dollar and ninety-eight cents; and a young girl who stood behind the counter asked her if she wanted to examine their line of silk hosiery. She smiled, just as if she had been asked to inspect a tiara of diamonds with the ultimate view of purchasing it. But she went on feeling the soft, sheeny, luxurious things – with both hands now, holding them up to see them glisten, and to feel them glide serpent-like through her fingers.[2]

What appears to be just an innocent accident becomes profoundly radical. From a passive position, in which she absentmindedly “grew aware” of the silk, she becomes actively enthralled in a drawn-out and bodily manner. This epitomises the New Woman trope of an awakening, characterised by Sarah Grand in her inaugural article ‘New Aspect of the Woman Question’ in 1894, and in Chopin’s most famous work, The Awakening (1899). Grand observes that New Women, “awaking from their long apathy”, grew conscious of the gendered injustices pervading late-Victorian society.[3] This concept usefully conveys a sense of epiphany echoed in Mrs Sommers’ response to the luxury stockings.

Mrs Sommers awakens from apathy to intense embodied engagement. Initially, her body is overcome by a “limp feeling”, insinuating weakness and a sense of physical impediment, with Chopin’s phrasing, as the limpness “comes over” Mrs Sommers, further emphasising her lack of autonomy, a lack of control within her body. She is also described as “aimlessly” resting her hand on the counter, suggesting that her movement is unmotivated. Here, Chopin characterises the unawakened apathy of Grand’s soon-to-be New Woman.

Chopin then highlights Mrs Sommers’ glovelessness. The stand-alone sentence foregrounds her class status by exposing her skin, a scandalous offense to Victorian middle-class notions of propriety and encoding the supposed primitivity of lower-class women. Her bare hand starkly contrasts to the silk stockings, hailed as “royal” and “costly” in the Ladies Supplement. Despite this, Mrs Sommers’ glovelessness functions to her advantage, as her failure to adhere to the dress codes of Victorian civility actually facilitates her tactile awakening. The stockings’ alluring silk texture appeals to Mrs Sommers’ sense of touch, which is readily available and exposed rather than suppressed and restricted by gloves. Through her sense of touch, Mrs Sommers’ long-repressed subjectivity and agency surge forth.

Touch is a sense widely characterised by its primitivity, having long been accepted as the least refined and basest sense,[4] and its duality. Simply put, it consists of an active toucher and a passive touched surface, and one may interchangeably (perhaps even simultaneously) occupy either position. This dual dynamic has been increasingly complicated within recent criticism, such as in Matthew Ratcliffe’s article ‘Touch and Situatedness’. Ratcliffe revises the supposed boundaries at play in touch, arguing that “what feels need not be what is felt”, and that in fact “there are plenty of cases where the object of touch is not located at the physical boundary between body and world.”[5] In collapsing this boundary, Ratcliffe proposes that “a sense of being situated in a world, rather than being cut off from it or viewing it from some strange, detached, dislocated standpoint, is partly constituted by those tactile relations that do not cleanly differentiate self from non-self” (original emphasis).[6]

By contrast, the boundary between self and non-self is cleanly depicted as Mrs Sommers first touches the stockings. This reinforces her passivity and lack of autonomy, placing her – in Ratcliffe’s view – in a “strange, detached, dislocated standpoint.” Chopin also places her, not in the active role of “toucher”, but, on account of her aimlessness, in the objectified role as “touched surface.” Mrs Sommers is disempowered, apathetic, and without a sense of herself as “situated”, as present within her body and environment.

This shifts as Mrs Sommers indulges in the material’s visceral texture. Chopin describes the stockings as “soothing” and “very pleasant to touch.” Primarily a textural description, this serves doubly to also depict the calming and comforting effect the silk has on Mrs Sommers. Once calmed, she begins to usurp the active role denied to her by Victorian society, as the stockings become “pleasant to touch.” They motivate self-pleasing action, initiating active touch. This self-indulgent pleasure is further tabooed by the silk, which in late-Victorian culture was, as Madeleine Seys observes, “a symbol of decadence, mystery, theatre, sensuality, and sex.”[7] 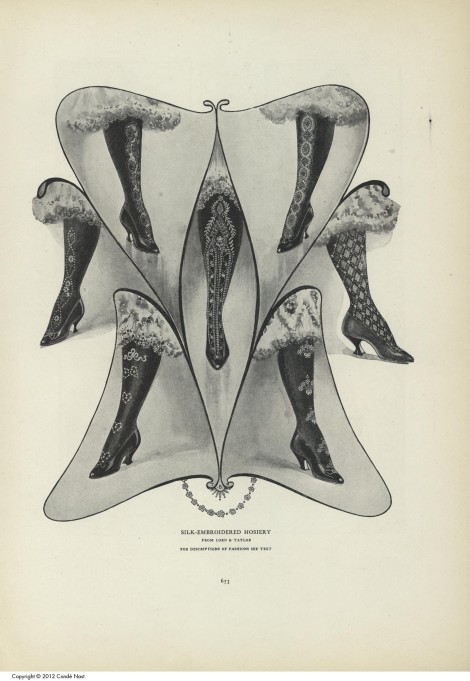 Such sensuousness keys into Mrs Sommers’ tabooed desires, enticing her and transforming her touch into direct and meaningful motion. Her movements, no longer aimless, are likened to “examin[ing]” and “inspect[ing]”, “with the ultimate view of purchasing.” Her touch is drawn-out, as she feels the silk for an undistinguished length of time, and all-consuming, as more of her body gets involved: “[S]he went on feeling the soft, sheeny, luxurious things – with both hands now, holding them up to see them glisten, and to feel them glide serpent-like through her fingers.” She feels with both hands, and with her individual fingers, utilizing her sensitive surface more and more. It becomes a multisensory experience, too, as her visual sense toys with light. As she delights in the pleasing sensations of her body against the silk, her subjectivity awakens, and she demonstrates a newfound autonomy.

Mrs Sommers relishes her awakened autonomy, abandoning all else but her own pleasures for the whole day. She goes on to buy a host of luxurious commodities to compliment the stockings, and confidently and leisurely occupies male-coded public spaces alone. This is radical, especially in the face of a Victorian society which demanded its mothers put their own needs (let alone desires and pleasures) beneath her domestic duties in the home. Indeed, Seys attests to this radical behaviour, writing that, “Dressed in silk, Victorian heroines reject the ideal of the Angel in the House.”[8] Donning her “unobtrusive” and “royal” stockings, Mrs Sommers finally becomes situated in the world, and indeed in her body, demonstrated as she enters a posh restaurant: “Her appearance created no surprise, no consternation, as she had half feared it might.”[9] The boundary between body and world has eased, in accord with Ratcliffe’s theory, evoking a sense of being and of belonging.

Ultimately, Mrs Sommers’ rebellious shopping spree demonstrates how sensory experience liberated female desires and unlocked female agency at the fin de siècle. Nonetheless, Mrs Sommers’ situatedness remains embedded in idealised and gendered inconspicuousness, and her emancipation is complicit in classicist and capitalist values, complicating her feminist awakening. The question of how we might reconcile this radical behaviour with its reliance on “costly” commodities is one my larger research project seeks to address.

[4] This classification, which privileges sight as the most refined sense, and relegates touch to the least refined, hails back to pre-modern philosophy. For a detailed overview of sensory hierarchies, see Constance Classen, ‘Engendering Perception: Gender Ideologies and Sensory Hierarchies in Western History’, Body & Society, 3:2 (1997), 1-19.

One response to “Tactile Awakenings: A working-class mother’s self-fashioned emancipation in Kate Chopin’s ‘A Pair of Silk Stockings’ (1897)”