This post contains some plot details for seasons 1-3 of Penny Dreadful. Read on at your own discretion

Last week I stated my wish for a quieter episode, that focused on one or two characters in a bit more depth. This week, that wish was granted. ‘A Blade of Grass’ is a frame narrative that starts and ends as a hypnotherapy session between Vanessa and Dr Seward. They are attempting to discover where Vanessa first met the Master, a.k.a. Dracula. Seasons one and two both took an early episode to explore a part of Vanessa’s past, and this season does the same. Specifically, we learn that John Clare (pre-Frankenstein, in his first life) was an orderly at the asylum where she was kept, and that they developed a bond over the five months she was interred there. 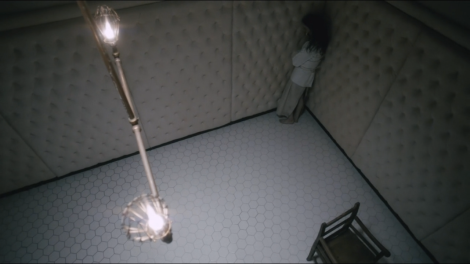 Penny Dreadful is at its strongest when it makes you wait. When it’s a little bit uncomfortable. This episode excels in that regard. It is full of uncomfortable sounds (the scratching of the phonograph needle on the wax cylinder, Vanessa scratching the rubber padding of her cell, Vanessa’s animal noises), uncomfortable visuals (the bulk of the episode takes place in Vanessa’s padded cell, confining the viewer as it confines her, and is often shot from above to induce a sense of paranoia), and uncomfortable situations. Re-living this experience isn’t easy for Vanessa, and the show makes certain it’s not easy for the viewer either.

Most of the action is confined to the interaction between Vanessa and her attendant, whose original name we never learn (the show teases us about this). To call the pacing of this episode ‘slow’, however, would be to undermine the tension in every frame. When putting together this post, it was actually extremely difficult to take a good screenshot, because so many emotions flicker across the faces of these two actors in a single second. The bond that grows between them is platonic – despite an awkward scene in which a distraught Vanessa attempts to seduce her attendant. It is also genuine, and heartbreaking.

Last week’s episode may have been the one entitled ‘Good and Evil Braided Be’, but this week goes into a lot more depth with these ideas. Two related stories dominate throughout the episode: good and evil, body and soul, the social and the supernatural. Oppression and empowerment.

The key theme of this episode is one of personal empowerment against overwhelming odds, and dominant discourses of oppression. ‘It’s not torture, what they’re doing. It’s science’, argues the asylum attendant, referring to the starvation, isolation, and ‘hydrotherapy’ Vanessa endures.

‘It’s meant to make me normal,’ Vanessa retorts. ‘Like all the other women you know. Compliant. Obedient. A cog in an intricate social machine… and no more.’ To her the attendant is clearly just another man – a kind man, but a symbol of the oppressor nonetheless, who thinks women can only be angels or whores.

He seems unconvinced, claiming: ‘Not all the women I know are cogs […] My wife’s not a freak and she’s not a cog. You should think better of your sex.’ He both deflects Vanessa’s concerns, and reminds her that there are more than two options. This discussion seems just as relevant to contemporary feminism and social justice as it is to Victorian social hierarchies.

Slowly, however, the attendant comes to realise that institutionalised compliance isn’t healthy for anyone – including himself. ‘Better’ is a relative term that always suits the majority. Some people will always be different, both medically and socially, and the choice to comply or rebel should ideally be theirs, not ours. But he cannot change Vanessa’s fate, or (symbolically) the fate of women more generally. As he gets to know the person behind the madwoman, his compassionate gestures amount to a kind of failed feminism, albeit one with inspiring vision. ‘One day,’ he tells Vanessa towards the end of the episode, ‘no one will ever touch you when you don’t want to be touched… ever, ever again.’ (I’m not crying YOU’RE crying.) 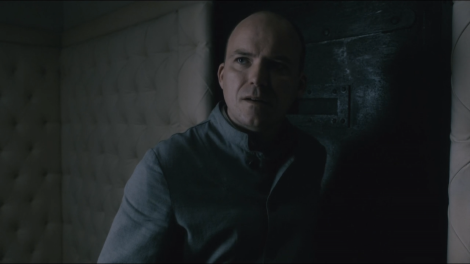 ‘A Blade of Grass’ also features some fascinating discussions about the relationship between naming, and perception or power. John Clare remains unnamed in his former life, and he has power over Vanessa because of it. Vanessa, likewise, is not herself in the asylum. She has lost her name.

Without naming, time passes differently as well. ‘Is it day or night?’ asks Vanessa repeatedly. The attendant asks: ’Which would you prefer it to be?’ ‘Night,’ responds Vanessa the first time. ‘Then it’s night,’ replies the attendant.

‘Which would you prefer now?’ he asks on another occasion. ‘Day,’ she replies, signalling her journey towards personal empowerment. ‘Then it’s day’, replies the attendant with a faint smile. 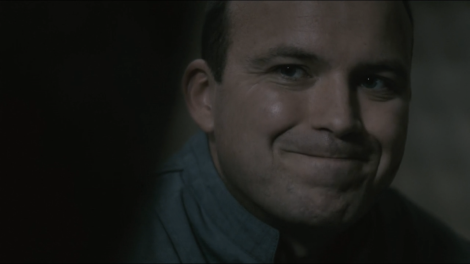 This is also a key part of the the journey Vanessa’s character needs to take in order to stand up to Dracula. As the episode closes, Vanessa reminds Dr Seward of the claims she made about naming the monstrous in a previous session: ’You once said we name things so they don’t frighten us. I’m not frightened. His name is Dracula.’

Indeed, the entire secondary plot – which I call this because it felt very secondary, despite its likely centrality to future episodes – was forgettable by comparison. Dracula (manifested here in the attendant’s physical form, rather than Dr Sweet’s), is apparently Lucifer’s brother (both expertly acted by Rory Kinnear). They both want to conquer heaven: the animal and the spirit. Both also want to conquer Vanessa. The one wants her soul, the other her body.

Vanessa isn’t ready to give them either, however. ‘Why would the Devil be interested in you?’ asks the attendant when Vanessa first confesses the real reason she’s in the asylum. She is unable to answer him then, but when the brothers (Twins of Evil, anyone?) ask how she dares to refuse them, she replies:

I am nothing. I am no more than a blade of grass. But I am. You think you know evil? Here it stands.

What exactly is Vanessa, then? Unclear as yet. But whatever she becomes scares off both brothers, and I look forward to seeing it manifested again against Dracula.

Additional Notes
– Does the fact that the moment of connexion between Vanessa and John Clare (pre-Frankenstein) happens on Christmas Day make this a Christmas episode?
– ‘Don’t you like poetry?’ ‘Uh, no’. Death apparently brings out the poetry in John Clare – though one of the most touching moments of the episode is when the orderly reads a book of children’s verse aloud to Vanessa. I dare you to re-read ‘My Shadow’ by Robert Louis Stevenson after watching this without getting a little misty-eyed.
– The attendant performs femininity for Vanessa at one point, brushing her hair, applying makeup, etc. He even holds up a mirror so she can see her reflection, stating: ‘This is who you are. Please don’t forget that’.
– It’s unclear how Vanessa survives her brain surgery ‘intact’. Perhaps, in the end, she doesn’t? Is this the root of her supernatural power? Is she not really herself?
– I was so sure Vanessa was going to kill the attendant in this episode, and that this would be the surprise twist, but it was not to be. How did he eventually die, then, that Frankenstein was able to use his body to construct Caliban, the Creature?
– I hadn’t realised how much I missed the slow tension and close character focus of season one until this episode. Penny Dreadful should always be like this.

Read the other reviews in this series of Penny Dreadful season three recaps by clicking the links below. (New links will become active as new episodes and reviews are released.)
Season Premiere: ‘The Day Tennyson Died’
Episode Two: ‘Predators Far and Near’
Episode Three: ‘Good and Evil Braided Be’
Episode Four: ‘A Blade of Grass’
Episode Five: ’This World Is Our Hell’
Episode Six: ‘No Beast So Fierce’
Episode Seven: ‘Ebb Tide’
Episodes Eight & Nine: ‘Perpetual Night’ and ‘The Blessed Dark’

Megen de Bruin-Molé (@MegenJM) is a second-year PhD candidate with the school of English, Communication and Philosophy at Cardiff University. Her current research focuses on neo-historical fiction, using the theme of monsters and the monstrous to explore how and why the twenty-first century persistently appropriates historical fictions, figures, and traces. Follow her blog (angelsandapes.com) for updates and related articles.