Patrick Low is a final year, Research Beacon funded, PhD student at Sunderland University. His thesis is entitled Capital Punishment in the North East of England 1752-1878. During his study, he created the online exhibition for the University of Leicester’s, Wellcome Trust funded, Harnessing the Power of the Criminal Corpse project (www.criminalcorpses.com) and blogs regularly on execution in the North East at www.lastdyingwords.com. He is organising a one day conference in Newcastle next year, June 6th 2018, to mark 150 years since the abolition of public execution in 1868. (www.1868conference.wordpress.com). Follow him on Twitter @lastdyingwords1 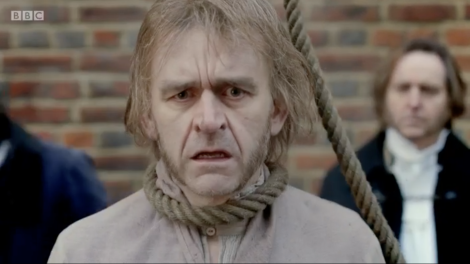 The second episode of the BBC’s nineteenth century medical comedy, Quacks, opens on a public execution.[1] A pallid, haunted man walks towards the camera and a noose is placed around his neck. Looking on, a raucous crowd pelt him with rotten fruit. A momentary pause and then, in the blink of an eye, the rope drops and he is launched into eternity. The spectators immediately rush to the gallows, but amongst the rabble one observer, fledging psychiatrist William Agar, stays rooted to the ground, appalled at the spectacle he has just witnessed. Agar is stood with friend and pioneering anaesthetist, John Sutton and opines “This is wrong!” Sutton looks on unmoved but soon has more pressing concerns,

“Oh frig I’ve been buzzed! I always get pickpocketed at the f*****g hangings.”

In under a minute we have a neat encapsulation of a scene so intrinsically linked with the c18th and c19th; the public execution. A raucous crowd, theft at the foot of the gallows, a rush for the body of the condemned or the clothes thereof and the increasing horror at the behaviour of the crowd by the professional classes. In this post, I will look at the c19th execution but, unlike Quacks and much of the existing historiography around hangings, my focus will be outside of the capital, choosing instead to focus on the North East of England.

The 1840’s was a period in which public executions were an increasingly rare phenomenon. The so called ‘bloody code’ of previous decades, had been dramatically dismantled in the 1820’s and 1830’s, leading to a rapid reduction in capital offences. This sparsity was particularly apparent in the North East. In Newcastle Upon Tyne between 1829 and the abolition of public execution in 1868, only 4 executions took place; roughly one a decade. However, the increasing rarity of the spectacle combined with a burgeoning rail system meant that the audiences for such spectacles were arguably at their peak in this period. Numerous newspapers noted of executions in this period that people had travelled by rail from surrounding counties to witness the spectacle. At the 1848 execution of William Thompson at Durham, one paper noted,

“The early trains poured immense crowds into the city…the majority of these consisted of pitmen, many of whom had come with the cheap market trains, and there was also a sprinkling of women and children.”[2]

One offshoot of such densely packed events was that theft at the foot of the gallows was not an uncommon occurrence. A packed crowd jostling for space and a prime view meant rich pickings for the light fingered. At the 1786 hanging of Henry Jennings, sentenced for horse theft, on Newcastle’s Town Moor one report noted that

‘During the awful ceremony, a boy named Peter Donnison was apprehended picking the pocket of a gentleman standing near the foot of the gallows.’[3]

Little had changed by the 1840’s. At an 1844 meeting of the Newcastle Town Council, the efficacy of capital punishment was debated and theft at the gallows featured heavily in the arguments of the members calling for its abolition. Alderman Donkin harangued,

‘I cannot conceive anything more horrible than taking a man from prison, parading him through the streets up to the Town Moor, and then hanging him like a dog (hear, hear). Moral Effect! Why more picking of pockets takes place at the foot of the gallows than anywhere else in ten times as many days or weeks in the year.”[4]

Although not a new argument, calls like Donkin’s were growing much louder by the 1840’s. Amongst the middling and professional classes there was a widely received opinion that executions were not producing the desired didactic effect. Far from cowing their audience, many thought they were relished by the public and had a dangerously brutalising effect. If the execution were a grand lesson for the public, the pupils were misbehaving. Chief amongst the proponents of this argument were leading writers of the day, most notably Dickens. Dickens was a regular execution attendee and he wrote to The Times in 1849 regarding his experience of the execution of The Manning’s outside Horsemonger Lane Gaol. It was the crowd, much more than the punishment, that caused his ire.

‘I believe that a sight so inconceivably awful as the wickedness and levity of the immense crowd collected at that execution could be imagined by no man.’[5]

Dickens appears in Quacks as part moral crusader, part lascivious narcissist, played with characteristic aplomb by Andrew Scott. He is approached over dinner by William Agar, who is seeking to campaign against public executions as he believes ‘they are damaging to the public’s minds and cause frenzy.’[5] An increasingly common assertion of the day. Earlier in the episode, Agar’s theory is tested at a drinking session at their local ale house. Agar’s Surgeon friend, Robert Lessing (Rory Kinnear), pulls aside the landlord, Mr Hubble, a bumbling Baldrick-esque character, and asks,

Hubble: ‘I absolutely love them. My dad used to take me when I was young. You never forget your first hanging as a child, do you?’

Although played for comic effect there is much historical accuracy in the scene. Children were frequently in attendance at executions and, indeed, often encouraged to get as close to the front as possible. Their attendance, as with that of women, caused great consternation in the newspapers of the period. Writing of the crowd at the execution of Matthew Atkinson in Durham in 1865, one newspaper opined,

‘There were a number of women too in the crowd several – oh, that there should be such mothers! – with children in arms…boys and girls, ragged and dirty, struggled hard with their elders to obtain a good position from which to view the grim scene.”[6]

Similarly, at the 1839 send-off of Jacob Frederick Elhert at Durham, reports stated that the crowd nearest the scaffold was ‘principally women and children.’[7] In the episode Dickens shows seemingly no interest in Agar’s idea but later goes on to steal it for a piece for the paper, which carries the headline ‘Dickens says Public Executions Cause Frenzy and Pain.’ The accompanying illustration is actually a representation of the 1829 hanging of the famous body snatcher, William Burke, in Edinburgh.[8] 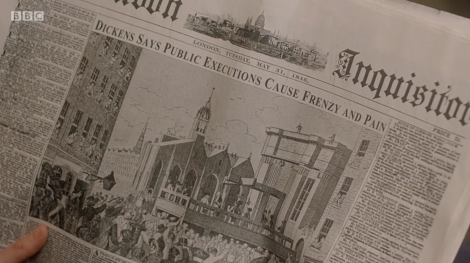 The extent to which the press’ horror of the crowd in this period was exaggerated has been highlighted in recent scholarship.[9] However, in Newcastle Upon Tyne, one very real episode of crowd trouble caused a major change in its presentations of the execution spectacle. From 1783, executions in London moved from the open space of Tyburn to the more central location of the exterior of the prison walls at Newgate. However, it wasn’t until 1844 that a similar change was proposed in Newcastle. The execution of Artillery Pensioner, Mark Sherwood, was originally mooted to take place outside the centrally located, Carliol Square Gaol. However, an incident at Nottingham weeks prior to Sherwood’s hanging caused the plans to be shelved. At the execution of William Saville, outside Nottingham’s Shire Hall, a crowd crush occurred after the hanging, owing to vast crowds rushing out through small side streets. The tragic event led to a number of deaths, amongst whom several were children. This tragedy caused national outrage and a last minute change of plan in Newcastle, which meant Sherwood was hung on the Town Moor on the outskirts of the town; the site of hangings for the previous 600 years. Indeed, it wasn’t until 1850 that a hanging took place outside the prison walls at Newcastle.

One final area of note in this study of execution and its presentation in Quacks, is the professions of William Agar and John Sutton. Both aspiring medical men, they were more likely than most to have had an interaction with the body of a capitally condemned man. As part of the 1752 Murder Act the ‘further terror’ of post-mortem dissection was added to the punishment of murder. As such, up until the 1832 Anatomy Act, the sole provision of bodies for surgical and anatomical instruction was that of executed criminals. In as much, aspiring medical men of the period would have almost certainly witnessed a criminal being dissected.[10] In Newcastle, the surviving diary of a surgeon’s apprentice in the 1820’s and 30’s, one Thomas Giordanni Wright, makes particular note of this. Writing on the 1829 execution of Jane Jamieson, he noted that the procession through the town went ‘within sight’ of his window. However, he chose not to look on or join the crowd, instead coldly noting that he would ‘most likely partake of the benefits accruing therefrom’ at her dissection.[11]

[3] John Sykes, Local Records; Or, Historical Register of Remarkable Events, Which Have Occurred Exclusively in the Counties of Durham and Northumberland, Town and County of Newcastle upon Tyne, and Berwick upon Tweed, 1824, p.340.

[7] Last moments and execution of Fredric Ehlert, who was executed at Durham, August 16, 1839, for the murder of Capt. Berkholtz, on board the Phoenix in Sunderland Harbour, June, 1839. Harding B 9/3 (164). Oxford, The John Johnson Collection: An Archive of Printed Ephemera <http://johnjohnson.chadwyck.com&gt; [accessed 27 August 2017]

One response to “You never forget your first hanging as a child, do you?”